"It is the responsibility of the People to maintain a standard level of intelligence in those we elect." 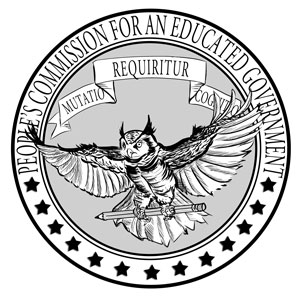 The People’s Commission for an Educated Government (PCEG) has released our Standardized Test for Congress, Version 1.7. The test was written by a coalition of citizens from across the United States and reflects the PCEG’s concerns with Congressional partisan divide, corporate manipulation, and political decision-making processes often infiltrated by unscientific and factually incorrect information.

Following the lead of those in our government that have embraced the standardized test as the measure of progress and potential in others, our Standardized Test for Congress does the same for our elected officials. It assesses the state of our union by measuring basic competencies in our elected officials in Science, Technology, Government, Arts & Culture, and Business.

Test booklets are being sent to all 535 members of Congress. We are respectfully requesting that each Senator and Representative spend a few moments of their time to take the test and send the completed answer sheet back for assessment by the People’s Commission for an Educated Government.

As engaged citizens, it is our responsibility to hold our elected officials accountable to facts and peer-reviewed science. These are significant times, and at no other time in our history has it been more important for the People to maintain a standard level of intelligence in our elected officials.

Sincerely,
The People’s Commission for an Educated Government

We are always looking for suggestions and feedback, so if you are interested in helping write the next version of the test, please contact us at contact@standardizedtestforcongress.com